Biodynamic research covers all major areas of the agricultural sciences, where many issues of significance not only for Biodynamic agriculture, but also for organic farming in general are being studied e.g. soil fertility, food quality and plant breeding. In addition, there is research focus naturally on the Biodynamic preparations. Primarily, the classical scientific method of investigation is used.

Biodynamic agriculture is based on a broader understanding of the human being, plant, animal, earth and cosmos. It is therefore closely connected with the development of research methods that seek to understand human nature in a holistic way.

A hallmark of these research approaches is to give serious recognition to the holistic human being and how consciousness is accessed. This is associated with the appreciation of ones own senses. Knowledge will not result from a rapid integration of the facts into an existing paradigm (like materialism). An unbiased, i.e. model-free, consideration of phenomena will create the possibility to learn new things and unexpected facts about the particular object of study. 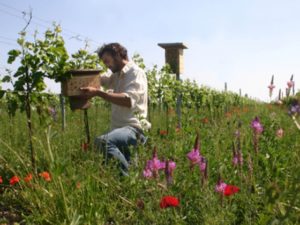 Goethe in his natural science investigations established this method. Rudolf Steiner developed the approach further, naming it accordingly ‘Goetheanism’. One of the resulting applications is the Goethean observation of plants – plants are seen in a time continuum allowing statements to be made about for instance harmony in their development (www.anthrobotanik.eu).  The phenomenological observation of life leads to an appreciation of the manifestations of the life of plants, animals, etc. in their rhythms, transformations and relationships with nature and the cosmos. It provides guidance for a broader understanding of living things and their context.

Research on Biodynamic quality means studying maturity, aging, organ formation (e.g. seed, fruit, leaf) or light and shade effects since these are seen as being just as important for the evaluation of food as an analysis of their nutritive components.

Central to the indirect perception of such effects in foods are the so-called picture-forming methods such as copper chloride crystallization and paper chromatography. These are imaging techniques which use the sensitivity of certain metal salts to respond to the addition of small quantities of organic matter in solution by generating specific forms and colours. The two methods have been scientifically validated in recent years at the University of Kassel. (Webmaster: All of the following documents are in German.)

A number of scientific papers on the methods are available. Copper chloride crystallization and chromatography are used at the Forschungsring e.V. amongst other research stations in Germany for the development of quality in Biodynamic products.

The holistic understanding of humans also causes observations to be taken seriously, which can not be classified using the senses because they are of a soul-spiritual nature. Out of a training in observation of the self and the natural world, a method has emerged to detect forces that constitute the living and lead to their sensory perception. This so-called formative forces research initiated by D. Schmidt has become an element of Biodynamic research into quality in recent years.

Using it, the effects of food on the human body and life forces can be closely monitored and characterised.

Although Biodynamic research is based on high ideals, it is not unworldly; it is aimed at solving fundamental and current issues. Some examples are:

II Selected research results (from 2000 on)

Other effects of the preparations

Spieß H. 2002: The importance of the BD preparations in the optimization of field measures and plant husbandry. IBDF e.V., Darmstadt, Series 16, pp. 51-59